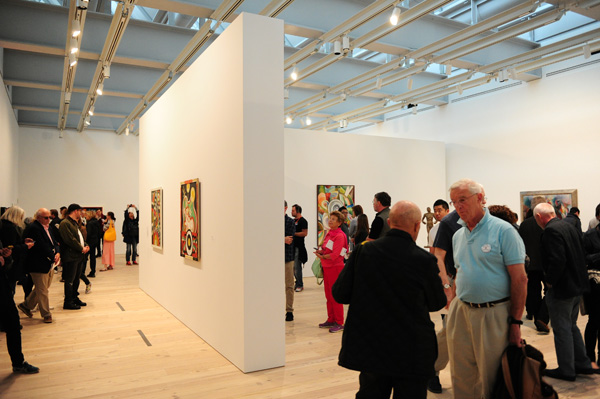 On May 1, 2015, The Whitney Museum of American Art opened the doors of its new home in New York City along the Hudson River. Designed by Pritzker prize-winning architect, Renzo Piano, the museum features 50,000 square feet of indoor gallery space as well as 13,000 square feet of outdoor exhibition and terrace space.

From the outside, the building’s beautifully segmented structure leaves a viewer wondering how the galleries inside connect. But once inside, the seamless galleries expertly display a variety of prestigious works. The museum’s debut exhibition entitled, “America is Hard to See” features American artists from 1900 to present day, and includes over 600 works from its collection of more than 22,000 works. Though the title of the exhibit tells the viewer “America is hard to see,” the exhibit itself doesn’t have to be.

Each individual piece of artwork is carefully lit through a combination of daylight and LED light sources. Matt Franks, of ARUP Lighting, the lighting designer of the project, worked with LSI to create the ideal lighting atmosphere and conditions for the Whitney museum. From the inception of the project, the overarching goal was to equip the museum with the latest LED technology in order to effectively light the collections as opposed to implementing traditional technologies. With this goal, the design team encountered several challenges. One challenge was how to effectively light potentially large works of art within cavernous, eighteen feet tall gallery spaces. When the project began four years ago, providing the proper light quality and quantity from ceilings that tall was nearing the capability limit of the LED technology at the time. By the time the actual gallery space was completed, the LED technology was more than capable of illuminating the space.

Another challenge was getting everyone involved in the project to agree on the standards for the LED fixtures. From the design team to the museum staff, everyone was involved in making the decision of whether or not the LED technology was going to show the artwork properly.  Historically, art museums have always been lit with incandescent or halogen sources. These sources and the quality of their light output has been the benchmark by which other sources are compared. In other words, getting the entire team of individuals involved to agree that the light from LED sources was equivalent to that of traditional sources and would justly highlight the artwork was no easy feat. The only way to accurately measure what the artwork would look like with the LED lights was to create a mock gallery. After seeing the artwork and the representative space lit with the LED fixtures, the entire team agreed that the LED light was indeed capable, which gave the design team the confidence to move forward in lighting the entire museum gallery space with LED.

An essential part of this project was the Track system, produced by LSI. As part of the architect’s design, the ceilings of the museum needed to be uncluttered and consistent throughout the entire building. This meant that the lighting tracks needed to be somewhat concealed within the structural steel elements of the ceiling. In order to meet these expectations, LSI created a track design without holes to insure the viewer wouldn’t see any daylight through the track structure. LSI’s Gemini track was installed in areas of the museum such as the conservation lab, which is where artwork is restored or repaired, because of the product’s ability to produce ambient light from the up-lighting, as well as allowing the exact same fixtures from the gallery to light the artwork as they are restored. This way the museum can see a better representation of what the artwork will look like in the actual gallery space while maintaining a brighter environment due to the up-lighting feature of the Gemini.

With the opening of the Whitney Museum of American Art, the use of high quality LED sources in world class art museums has accelerated. The museum industry’s transition from traditional sources to LED sources is growing rapidly, and the technology is proving to be more than capable of showing artwork in its best light.