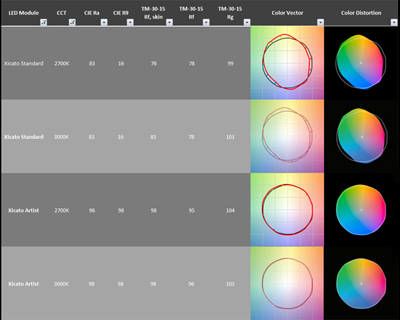 For the past 40 years, the color rendering of light sources has been measured using CRI (Color Rendering Index).  For the most part, this has worked just fine – but what if, instead of grading a light source on only 8 color samples (CIE 1974), we could base it on 99 samples that actually represent colors we encounter in the real world.  This is what the IES has done with its release of TM-30-15.  Using more samples provides a more reliable metric for measuring color rendering of light sources.  TM-30 not only evaluates a light source on its closeness to a reference light source, but also on its increase or decrease in chroma.  What does this mean?  Since this subject isn’t exactly black and white, let’s take a closer look. 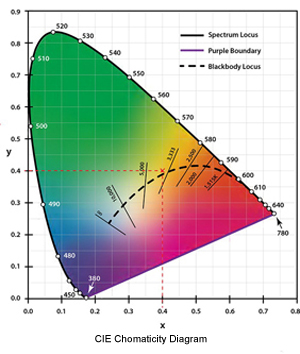 When evaluating the color rendering properties of a light source, it is compared to a reference illuminant with the same correlated color temperature (CCT).  With light sources that have a CCT lower or equal to 4500K, the reference illuminant is the black body locus (see right).  This reference source portrays colors as they truly are, therefore, according to CIE 1974, its CRI is 100.  As mentioned above, the CIE 1995 method for evaluating light sources relies on just 8 color samples.  In TM-30, there are 99 color evaluation samples (CES).  By comparing the chromaticity coordinates of the 99 samples when illuminated by the test source and the reference source, and calculating the average change, we can calculate the fidelity index, or Rf.  The range of this value is from 0-100, with 100 indicating identical appearance.

It is important to note that some sources may have lower or higher Rf values than CRI values.  For example, a light source could have been previously optimized to portray the 8 color samples only so it scored high with CRI.  However, when tested with 99 samples, the light source could score less because its spectral power distribution (SPD) curve does not allow the additional samples to be accurately represented. 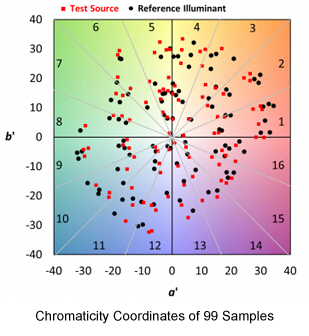 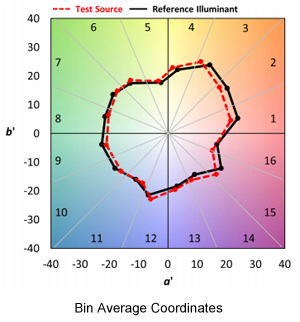 But the question still remains, how is the Rg value calculated?  The (a’, b’) plane above is cut into 16 sections (numbered on graph).  The arithmetic mean of the a’ and b’ coordinates of all the samples in each section for both the reference source and test source result in 32 coordinate pairs.  The 16 pairs for the reference source and the 16 pairs for the test source are plotted on the same graph and each make up a similar polygon (see right).  Rg is calculated as 100 times the ratio of the area of the two polygons.  It is important to keep in mind that this calculation determines the average gamut area for all of the CES and not the largest possible area defined by the most saturated samples only.  This is how the calculation is performed because it is better to represent all colors rather than just a subset of the most saturated colors. 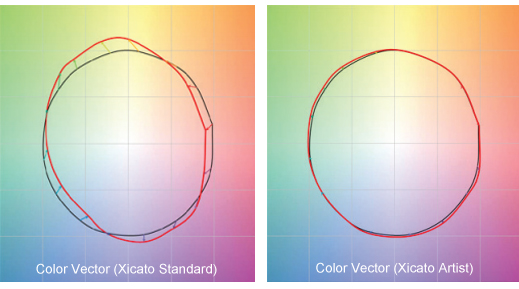 Now that we have values for both Rf and Rg, it is easier to see how it works through graphical representations.  The color vector graphic (shown above) shows which colors are saturated or desaturated and which colors undergo a hue shift.  The reference illuminant is normalized to a black circle and the gamut of the test source is plotted relative to the circle.  Arrows that point into the black circle indicate areas of decreased saturation while areas that point out of the black circle indicate areas of increased saturation.  Arrows that do not point directly to the center of the circle or directly away from the center of the circle are representing hue shift. 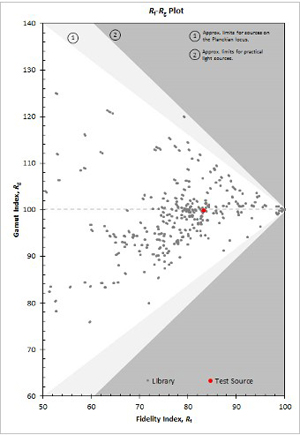 TM-30 is an improved color metric that will help to more accurately measure the color rendering of many light sources, especially LEDs.   With more color samples, a more accurate assessment of color fidelity can be made.  More color samples also suggests more detailed information about the rendition of specific objects.  For example, CES 15 and CES 18 represent human skin tones. In an application where the color rendering of skin is important, the Rf,skin fidelity score (average of CES 15 and CES 18) can be calculated and can help with choosing the most appropriate light source.  Below is a graph showing the fidelity scores of each individual sample for a given light source, as well as a graph showing color rendition by hue bin.

With CRI, the higher score was usually considered better.  With TM-30, the best light source depends on what application it will be used in.  TM-30 provides its users with enough detailed information to accurately make that decision.  At the end of the day, TM-30 is a great tool that will tremendously help the lighting community with understanding and applying color rendering metrics.

Click here for a printable version of the white paper