LSI’s Got a Knack for 0-10V Dimming on Track 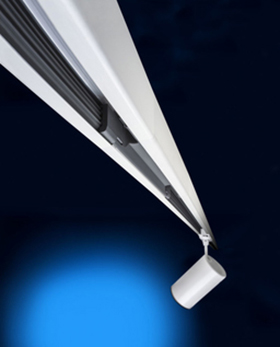 For over 60 years, LSI has been the premier track lighting manufacturer. For much of that time, having two separate circuits of power, each with its own neutral busbar has been more than sufficient for the limited controls necessary for lighting museums, offices, retail, houses of worship, or wherever the flexibility of track lighting is appropriate. As newer, stricter energy codes are impacting all built environments, and as controls and digital lighting systems are getting more and more sophisticated, it was time for LSI to introduce our latest track system; CONTROLTrack. 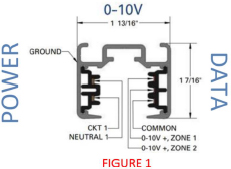 Figure 2 below shows how 0-10V should be wired to CONTROLTrack. If two zones are needed, the COMMON data wires for the
0-10V dimmers must be connected and then wired to the track (see red circle). 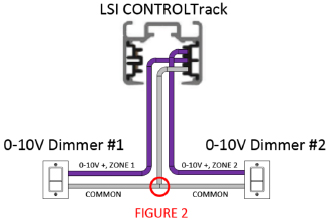 Two zones of 0-10V control on a single track run is desirable in most applications. One word you often hear when talking about track is flexibility and with two zones of 0-10V, it is even more flexible. The two zones allow for specific fixtures to be controlled together. Perhaps the best part about LSI’s 0-10V system is how easy it is to set up zones on a single track run. Each 0-10V compatible fixture comes with a switch on the back of the fitting. All you have to do to create zones is keep the switch to the left for all of the fixtures you want on one zone and flip the switch to the right for the fixtures you want on the second zone. See below image of the switch on LSI CONTROLTrack fittings (Figure 3): 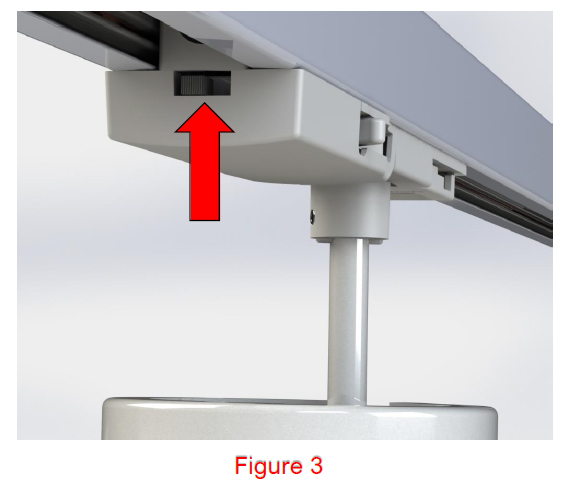 There are a couple of significant features available to you when you have two separate zones of 0-10V control. One of those features is the ability to control groupings of spotlight fixtures on one zone, and groupings of wall wash fixtures on the other. Many museums use this technique to create a more dramatic effect by having spotlights highlight a portion of the artwork at slightly higher levels than the background wall wash. Another extremely useful feature of having two separate zones of control from a single track system is the ability to control both intensity and color temperature from one fixture, by simply accessing the two control zones. For instance, LSI makes many fixtures with integrated Lumenetix modules where one 0-10V zone is used to control the intensity, and the other 0-10V zone is used to control the CCT range. When using Lumenetix and 0-10V, the minimum dim level is 1%, and the CCT range is 1650K to 6000K. Please see fixture cut sheets with Lumenetix in the title for complete offerings. 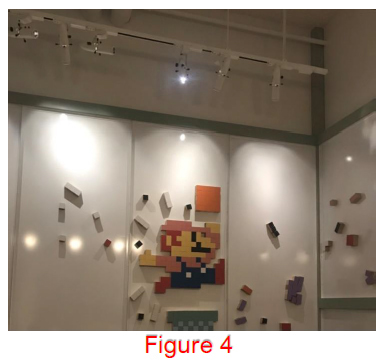 Many new buildings or newly renovated buildings must abide by new energy codes which require occupancy and daylight sensors to be incorporated into the lighting and controls package. Most sensors use 0-10V which require fixtures to have 0- 10V drivers in order to be easily integrated. In a recent corporate office installation in New York City, 0-10V track and fixtures were integrated with occupancy/vacancy sensors that turn the fixtures on when a space is occupied and turn them off when they a space is vacant. This is part of one of NYC’s most recent energy code requirements regarding lighting a space after it is left unoccupied. The fixtures used on this project were BPMs which were used for accent lighting (Figure 4) and also with GOBOs installed to project images and the corporate logo (Figure 5). 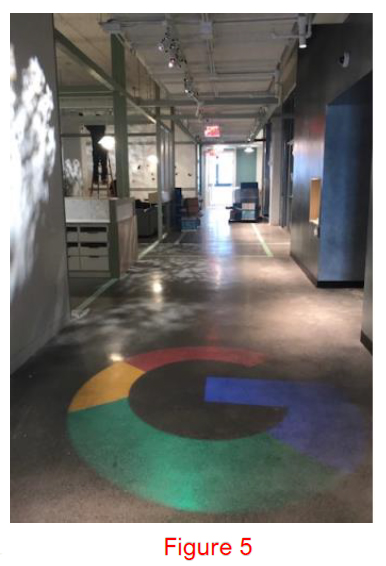 While 0-10V dimming helps with code compliance, there are several other advantages of using this protocol. It is a simple, low-cost dimming method that most people are familiar with and feel comfortable with. A huge factor in why it is a low-cost system is that it does not require commissioning or software. 0-10V dimming is also considered to be a reliable control method because it is a wired system. The wiring of 0-10V is rather simple compared to other protocols because it allows loops, “Y”s, and does not require termination. Another added bonus is that 0-10V is easy to troubleshoot. LSI has created a technical FAQ for 0-10V track systems which can be found here.

Even though 0-10V dimming is a simple system, there is one common misconception. 0-10V dimming is analog dimming done through two low voltage control wires from the dimmer to the LED driver. The DC voltage over the control wires varies between zero and ten volts to change the intensity of the LED. At ten volts, the light will be at its max intensity or 100%. At zero volts, the light will dim to its minimum light level. The minimum light level depends on the driver being used and, in most cases, the minimum is around 10%. In order for the fixture to turn off completely, there must be a switch or relay available to kill the power to the system. The common misconception is that the “zero” in 0-10V means OFF – which is not typically the case.

If you are interested in learning more about how 0-10V dimming works and other technical information, please refer to our Technical Info tab on our CONTROLTrack web page. There are many LSI products that are compatible with 0-10V which can be found on the “Products” page of our website. See fixture spec sheets with “CONTROLTrack” in the title for 0-10V offerings.

If you have more questions on 0-10V dimming or would like to discuss LSI products that are compatible with 0-10V dimming, our Technical Services team can be reached at applications@maillsi.com.