Can Museums Measure Up?

Museums rank among the most demanding and exacting of all lighting applications. Visitors come from far and wide to see the exhibits, which must be displayed in the best possible light, literally as well as figuratively. This means they must not only be easy to see, inter­pret, understand and appreciate—all the way down to the smallest detail—but also look as attractive as their artists and creators intended. The long-term damage that light can inflict on artwork and artifacts complicates matters even further—as does the fact that these objects come in a variety of shapes, sizes, colors and textures, all of which can impact the light­ing equation.

That said, LED lighting products that can’t pass muster on characteristics such as color rendering, color temperature, and appropriate beam intensity and spread won’t be considered for use in museum set­tings, regardless of how energy efficient they might be. And since solid-state lighting (SSL) is still an emerg­ing technology there’s no lack of LED products on the market that fall short of the mark on those parameters.

But even at this relatively early stage of the game, it would be a mistake to conclude that SSL is fit only for “plain-Jane” applications such as warehouses and parking lots, and that it will inevitably transform an art­ist’s carefully chosen palette into something drab or garish. Despite a wide range in the performance of the LED lighting products currently on the market, we’re beginning to see some that can be considered serious contenders for high-end applications and may even be preferred over their traditional counterparts.

Gateway demonstrations of replacement lamps at three different museums bear this out, while also em­phasizing the importance of patience, due diligence and tough-minded rigor in sifting through the vast ar­ray of LED lighting products out there. The payoff can be worth it, because in addition to the energy savings, many LED products have long lifetimes, which can be a big advantage in museums, where lighting mainte­nance may be especially costly and disruptive. There’s also the matter of HVAC load: Not only do LEDs gen­erate less ambient heat than incandescent lamps, but a rule of thumb is that every watt of lighting energy saved reduces the air-conditioning load by one-third of a watt, which in a museum’s carefully controlled ther­mal environment can make a big difference.

The main focus of a Gateway demonstration underway at the Getty Conservation Institute in Los Angeles is on how SSL compares with traditional lighting in terms of the damage it can inflict on artwork and artifacts. Senior scientist Jim Druzik is moni­toring an exhibition of Holy Land photographs at the J. Paul Getty Museum taken between the 1840s and the early 1900s. The photos— albumen prints with a very subtle pinkish tinge—are highly light sensitive, which makes them fitting subjects for a study of this kind. The halogen PAR38 lamps that are normally used in the museum’s high-ceilinged photo exhibition hall were replaced by Cree LRP-38 LED lamps, with Druzik monitoring the color changes of selected photographs every two weeks.

In addition, Druzik is conducting standard radiometric accelerat­ed-aging tests comparing two different LED lamps with their halo­gen counterpart. The procedure involves exposing a number of high­ly sensitive colorants to light and removing samples on a periodic schedule for color measurement. In this manner it’s possible to begin realistically assessing the potential for LED light damage.

Among the colorants are the three most sensitive International Organization for Standardization (ISO) “Blue Wools.” The ISO “Blue Wool tests” are used by conservators to determine the amount of light exposure at a given location and lighting scenario. They involve measuring the degree of fading in eight swatches of wool, each one colored with a different mixture of blue dyes that fade at a known rate when exposed to light. The light dose can be estimated by how much the wool samples fade over a given period of time, based on the known fading rate for light sources with and without an ultraviolet component to the spectrum. Including the three most sensitive ISO blue wools along with the other 16 colorants gives researchers the ability to calibrate these dosimeters in the future, if their responses are found to be different for LEDs than for standard halogen lighting.

Since SSL is such a new technology and the spectral power dis­tribution of light sources varies, its fading risks have not yet been determined, so one of Druzik’s goals is to determine those risks for the most successful LED lamp options and recalibrate the Blue Wool test for LED lamps accordingly. The two LED products being evaluated are an MR16 retrofit manufactured by CRS Electronics, and a custom-designed source made by Xicato.

The work is still preliminary, and measurements have only been conducted up to one million lux-hours’ exposure, but what Druzik has found to date is that most of the dyes fade at the same rate, re­gardless of which light source is being assessed, no doubt due to the similarity in the spectral power distribution of the sources. But in addition to the dyes used in the first three blue wool swatches, six of 16 dyes known to have been available and used by artists in the past actually faded somewhat more slowly under LEDs than under halogens (Table 2). While these tests haven’t yet been com­pleted, the results so far are encouraging and suggest that LEDs pose no more of a fading risk to artwork than do halogen sources.

Druzik notes that of the various dyes he’s studying, none are fading faster under LEDs than under the halogen control. He has­tens to add that, compared to earlier LEDs, the reduced peak in the short-wavelength region from the blue LED chip in current warm-white products is probably a major contributing factor to the simi­larity in fading rates between LED and halogen. The weaker long-wavelength region may also be contributing to the few colorants that 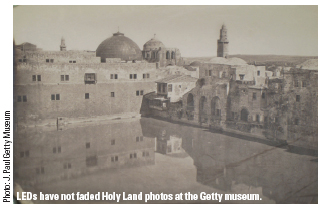 fade more slowly, including the three ISO blue wools. Druzik says this should sweep away the concerns that a lot of museums have had about using LED light sources, since up until now their effect on art objects was largely unknown. In the future, the Getty Conservation Institute will extend this work to colorants of a more intermediate light sensitivity.

As for the Holy Land photographs, Druzik says the results so far show no fading whatsoever and indicate that damage caused by the LED lamps will not be a factor for the life of the exhibit, which began in March of this year and ends in September. This makes LED lamps comparable to their halogen counterparts in that re­gard. Druzik notes that this kind of testing is not often carried out because it’s so labor-intensive, which means that the results should be of great interest to the field at large.

Although art conservation is the main focus of this particular Gateway demonstration, Druzik emphasizes that the underlying mo­tivation is a desire to save energy and maintenance costs with SSL, while maintaining a lighting quality comparable to that of halogen sources. He reports that as far as lighting quality is concerned, no difference has been noticed so far between the two technologies, and the staff is quite happy with the performance of the LED lamps. Druzik notes, though, that assessing such things as color quality can be quite subjective, which is why he predicts that there won’t be one single LED product or brand that emerges as the “winner” that’s pre­ferred by all museums. Instead, museums will opt for products that suit their own particular tastes and requirements. 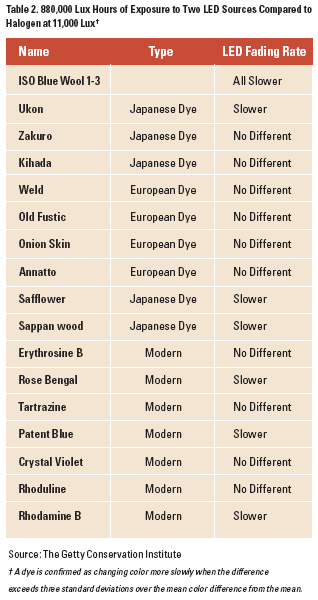 Druzik is also impressed by the warranties offered by some SSL manufacturers, which extend to color temperature, and he adds that one warranty he saw guarantees the product to within plus or minus 100K—a very tight range that’s close to the limit of human color perception. If the preliminary results are borne out, Druzik believes that the staff of the J. Paul Getty Museum may eventually convert all the current halogen track lighting to LED lighting.

Click here for the full article “Can Museums Measure Up”