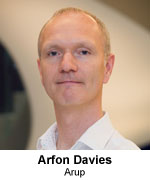 "Piano wanted a lighting design that was adaptable and tunable. To that end, the gallery lighting marks a milestone for the RPBW-Arup team. It is the first time they used an all-LED solution. The design of the space, with its 29 pairs of 100-foot-long laminated wood beams, allows the galleries to be completely open and a system of movable partitions to be rearranged based on the needs of the exhibit. The space can be lit primarily with daylight, or can be changed to be lit primarily by electric light. The spotlights, outfitted with 24W 3000K LED modules, and other building systems such as sprinklers and security cameras are run on tracks positioned in between the beams to keep the ceiling plane as clean as possible." (Architectural Lighting Magazine, Jan/Feb 2014)